by Britt McHenry
in Business
0 0
0

Amazon says the 18,000-seat venue formerly known as KeyArena is being renovated to become the first net zero carbon sports arena in the world.

Love it or hate it, Amazon has decided to rename a sports venue in Seattle, Washington, the “Climate Pledge Arena.”

On Thursday, Amazon announced it had secured the naming rights to KeyArena, which will play home to a new NHL hockey team and the city’s WNBA team, the Seattle Storm. The company could’ve easily renamed the building after itself, like so many corporate sponsors tend to do. But Amazon CEO Jeff Bezos had another idea in mind.

“Instead of naming it after Amazon, we’re calling it Climate Pledge Arena as a regular reminder of the importance of fighting climate change,” he said in today’s announcement.

The new name doesn’t exactly roll off the tongue. But it does promote Amazon’s Climate Pledge project, a plan the company announced a year ago to reduce its impact on the environment. 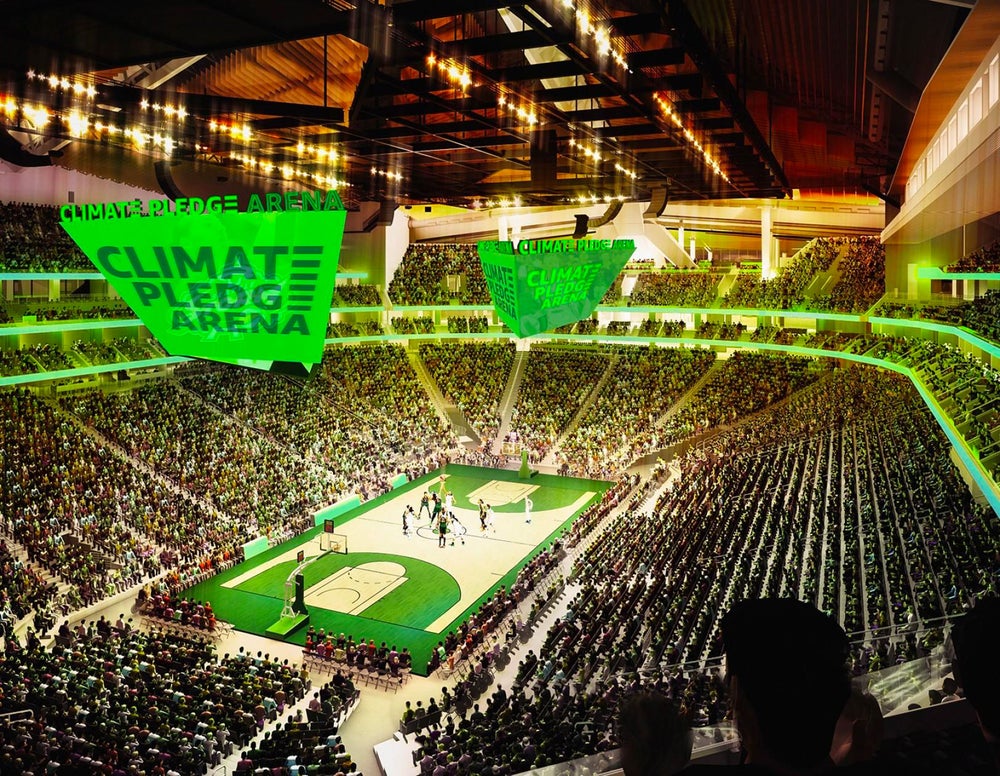 The pledge calls for Amazon to achieve net zero carbon emissions by 2040. This means the company can technically still generate carbon emissions, but it’ll need to offset them either by planting trees or using other carbon capture technologies. To pull this off, Amazon is transitioning to electric delivery vehicles and tapping renewable energies to power its operations; it also created a $2 billion fund for “decarbonizing” technologies.

The new Climate Pledge Arena is also being folded into the pledge. According to Amazon, the 18,000-seat venue is being redesigned to become the first net zero carbon sports arena in the world.

The plan is to convert the arena into an all-electric building powered by renewable energies, including solar. To create the ice for NHL team games, the site will rely on reclaimed rainwater. All events at the arena will also use durable and compostable containers so the arena can divert 95 percent of trash away from landfills.

“Our goal is to be the most progressive, responsible, and sustainable venue in the world,” said Tim Leiweke, CEO of Oak View Group, the arena’s owner.

Climate Pledge Arena is scheduled to open in late summer 2021. According to The Seattle Times, the renovation project for the sports venue is expected to exceed $930 million in costs.

In the meantime, critics on social media are already rolling their eyes at the name change, and wondering if the funds could be better spent elsewhere. Amazon declined to say how much it paid for the naming rights. But rumors suggest Oak View Group was asking for as much as $14 million annually for the arena’s naming rights.

Amazon isn’t the only company committed to its Climate Pledge plan. Earlier this month, Verizon, Infosys, and British company Reckitt Benckiser joined the pledge as well.

How Small-Business Owners Can Build a Strong Corporate Culture

Tech giants are aligned against Hong Kong’s security law. Apple is a holdout

When should you sell your stocks? Only in these cases

The Secret to Leading Without Authority

Elon Musk’s Boring Co. may tunnel under even more of Las Vegas